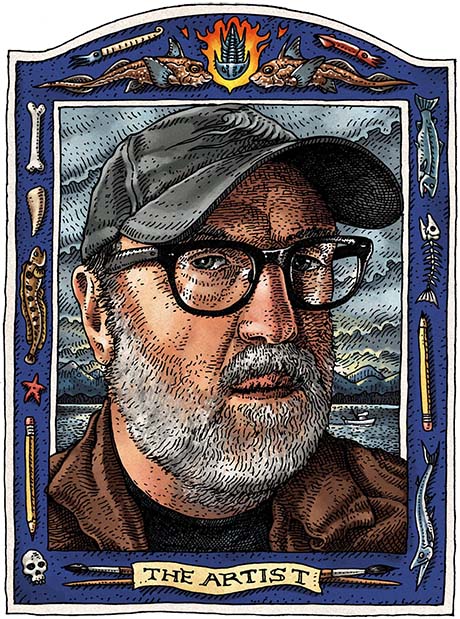 Self PortraitIn his studio on a hill above Tongass Narrows in rainy Ketchikan, Alaska, Ray Troll creates fishy images that swim into museums, books and magazines, and onto t-shirts worn around the world. He draws his inspiration from extensive field work and the latest scientific discoveries, bringing a street-smart sensibility to the worlds of ichthyology and paleontology.

Ray’s unique blend of art and science evolved into a traveling exhibit, “Dancing to the Fossil Record,” that opened at the California Academy of Sciences in San Francisco in 1995. The exhibit included his original drawings, gigantic fossils, fish tanks, murals, an original soundtrack, a dance floor, an interactive computer installation, and the one-of-a-kind Evolvo art car. In 1997 the exhibit traveled to the Oregon Coast Aquarium in Newport, in 1998 to the Academy of Natural Sciences in Philadelphia, and in 1999 to the Denver Museum of Nature and Science.

Ray followed that tour a few years later with “Sharkabet, a Sea of Sharks from A to Z” in venues including the Science Museum of Minnesota, the Anchorage Museum of History and Art, the Alaska State Museum and the Museum of the Rockies in Bozeman, Montana. Ray went on to act as the art director for the Miami Museum of Science’s “Amazon Voyage” traveling exhibit. He installed “The Buzz Saw Sharks of Long Ago,” inspired by his favorite extinct shark, Helicoprion, at the Idaho Museum of Natural History, Point Defiance Zoo and Aquarium in Tacoma, the Alaska SeaLife Center in Seward, and the Oregon Museum of Natural and Cultural History. He now has another touring show based on his book Cruisin’ the Fossil Freeway with Dr. Kirk Johnson.

In 2007, Ray was awarded a gold medal for distinction in the natural history arts by the Academy of Natural Sciences in Philadelphia, and in 2006 received the Alaska Governor’s award for the arts. In 2011, Ray and Kirk Johnson were jointly awarded a John Simon Guggenheim Memorial Foundation Fellowship to support their ambitious book project, “The Eternal Coastline: the Best of the Fossil West from Baja to Barrow.” He has appeared on the Discovery Channel, lectured at Cornell, Harvard, and Yale, shown work at the Smithsonian and has been honored by the naming of a species of ratfish, Hydrolagus trolli, and a genus of extinct herring, Trollichthys.

Ray earned a Bachelor of Arts degree from Bethany College in Lindsborg, Kansas in 1977 and an MFA in studio arts from Washington State University in 1981. In 2008 he was awarded an honorary doctorate in fine arts from the University of Alaska Southeast.

Ray and his wife Michelle run the Soho Coho gallery in Ketchikan appropriately situated in an old historic house of ill repute located on a salmon spawning stream. Ray believes that everyone should be in a band regardless of talent or ambition, and leads an ensemble of musical renegades called the Ratfish Wranglers who perform in festivals, saloons, and dance parties around Alaska and the Pacific Northwest. 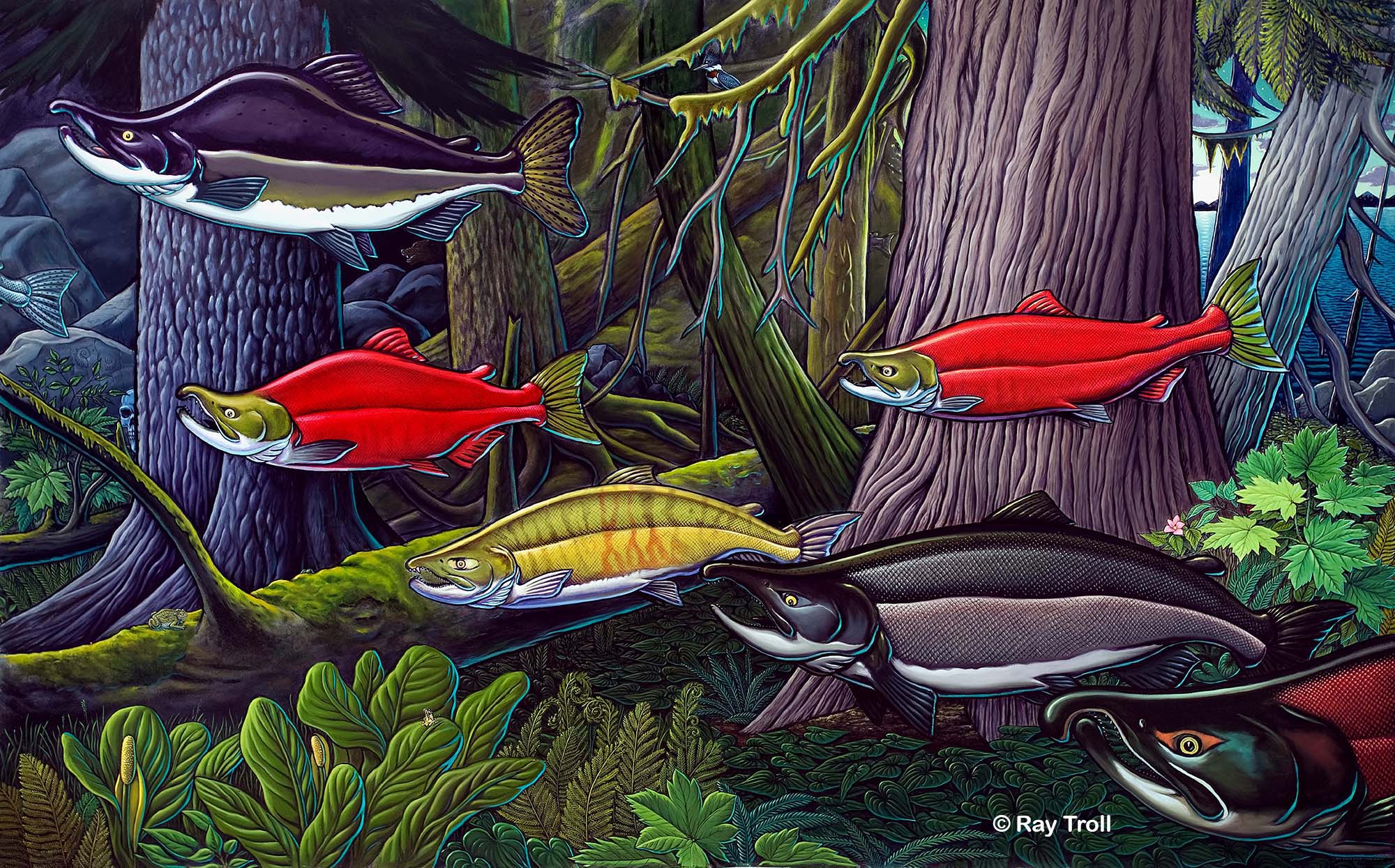 Moving to the state of Alaska in 1983 exposed me to the forces of the ‪natural world like few place on our planet can. It changed my life and it ‪changed my art. Living on the edge of the Tongass National Forest and ‪being in such close proximity to the wild world with deep woods on one side ‪of me and the deep ocean on the other, was magical for me and
‪transformative for my art. It fueled my creative spirit and filled me with an ‪urge to try and translate that raw power to paper and canvas, and oddly ‪enough fish became my emissary from that untamed world.

‪It’s fairly obvious when looking at my work that I’m obsessed with our ‪scaly brethren, but why? It’s hard to explain an obsession rationally but I’ve ‪been asked countless times and my answer is always multi-faceted. In short I ‪still find the topic fascinating and with over 25,000 living species to choose ‪from one can see why the topic is nearly inexhaustible. I can say that they’ve ‪become vehicles for my moods, my thoughts, and my opinions about the ‪human condition and our own place in the grand biological scheme of ‪things. Sometimes whimsical, sometimes menacing and edgy, the fish lead ‪me on, diving deeper into further creative explorations.

‪As I spent more time delving into the topic my curiosities led me to befriend ‪scientists and writers. I slowly came to realize that scientific inquiry and ‪artistic inquiry overlap beautifully as both disciplines seek to ‘know the ‪world’ in overlapping ways. I’ve embarked on many an adventure since then ‪and have found myself in some pretty strange places, like crawling around ‪on my hands and knees looking for trilobite fossils on a tiny Southeast ‪Alaskan island or deep in the Amazon rainforest wrestling caimans at night.

‪Needless to say my creative batteries have been endlessly recharged by these ‪associations. They led me to believe that the cross currents between art, ‪science, music and literature are the waters I prefer to swim in. ‪I’ve also found it immensely gratifying to share that sense of artistic ‪adventure with other people through collaborative art projects, exhibits, ‪lectures, performance events, and books. It’s especially rewarding to pass ‪that sense of wonder and delight onto the next generation when I’ve spoken ‪at schools and universities. It makes my strange quest seem worthwhile. 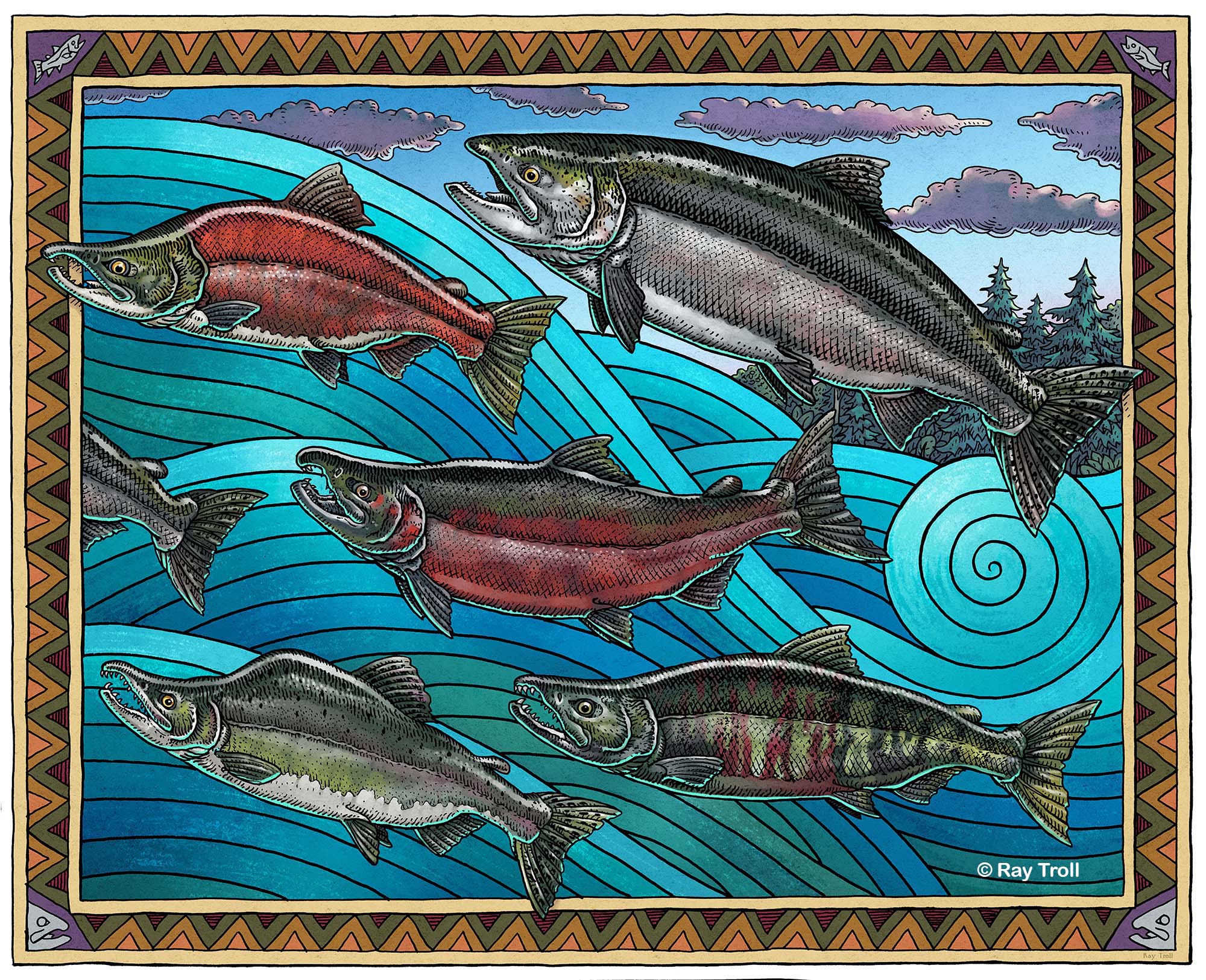 Long May You Run © Ray Troll