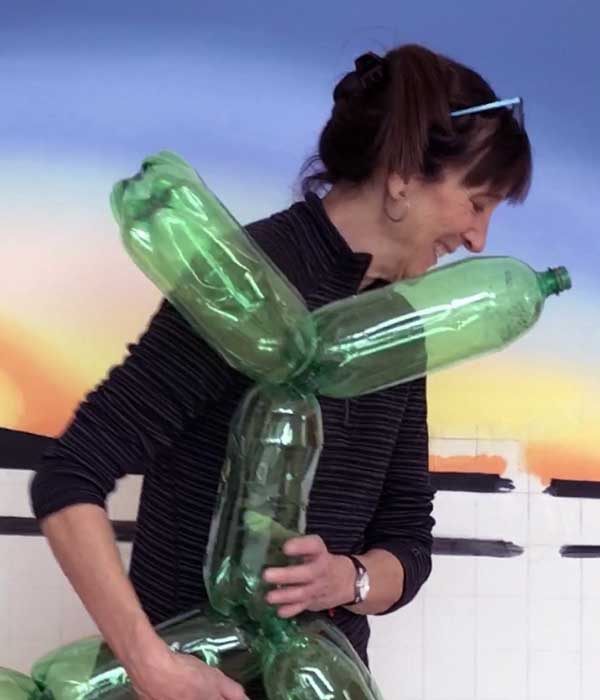 Karen Hackenberg received her BFA in painting from Rhode Island School of Design, moved west to live for a decade and a half in San Francisco, and now lives and works on a secluded bay near Port Townsend, WA.

In her ongoing painting series, she uses wry humor inspired by the irony and incongruity of the human-made detritus that washes up on the beaches below her studio to masquerade as native sea life – plastic shards, bottles, toy animals, shotgun shells, and product packages, to name a few. She is influenced by Pop Art of the 1960s – Claes Oldenburg’s monumental everyday objects and Ed Ruscha’s paintings combining marketing graphics with images of nature.

Hackenberg has recently been invited to participate in the 2023 NW Perspectives series at Tacoma Art Museum in a solo exhibition to honor her work as a foremost regional artist.
Her work was also chosen for the noteworthy biennial exhibition, Northwest Art Now at the Tacoma Art Museum, curated by TAM’s Rock Hushka and Juan-Roselione, curator of the Rubell Family Collection, Miami.

Hackenberg’s museum exhibitions include a solo exhibition at Bainbridge Island Museum of Art; the international traveling show, Environmental Impact II; Neo-Naturalists at Museum of Northwest Art; Stilleven: Contemporary Still Life at Hallie Ford Museum of Art; and Beneath the Surface: Rediscovering a World Worth Conserving at A.A.A.S. headquarters, Washington DC.

Her green sensibility has earned a place in numerous private and public collections, including the New York State Museum, NY, the Portland Art Museum, OR, the Tacoma Art Museum, WA, the Washington State Art Collection, Bainbridge Island Museum of Art, WA, and the Hallie Ford Museum of Art.

The success of the Elwha River dam removal is evident in the large numbers of salmon now returning to spawn, and we now need to remove the Snake River dam to benefit the whole ecosystem. Orcas depend on abundant salmon for their survival, and without these fish, they will become extinct.

I humbly believe we are not above the beasts, and that we have an ethical and practical responsibility to live among them with due respect. Instead, many of us still justify our subjugation of animals by clinging to obsolete ideas born in the stone age. Since each of the beasts on the planet has evolved with its own form of native intelligence, suited to a specific region within earth’s ecosystems, I believe that all species have equal value and rights to livelihoods in the habitats they’ve emerged. 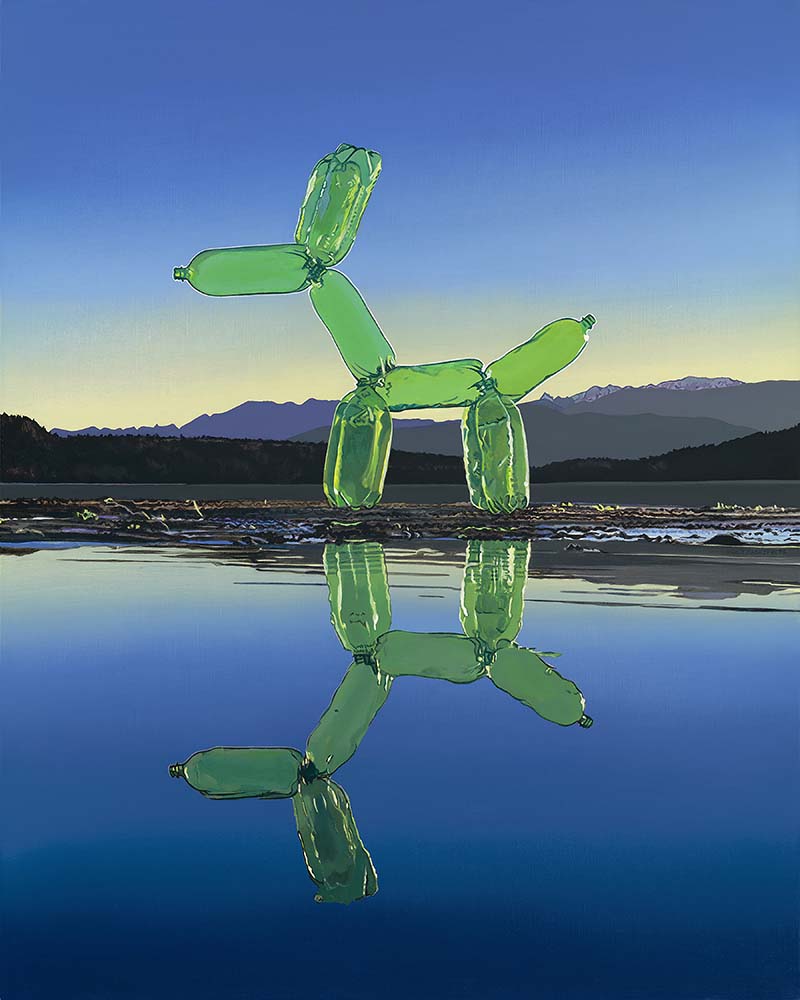 Karen Hackenberg: Double Trouble
2021 - oil on linen
My painting, Double-Trouble, steps out of the primordial ooze of our Plasticene Era, with a plastic bottle-dog, PETE, trolling a Jeff Koons. Plastics accumulating in salmon habitat is double-trouble and leads to extinction.  Courtesy of: Patricia Rovzar Gallery 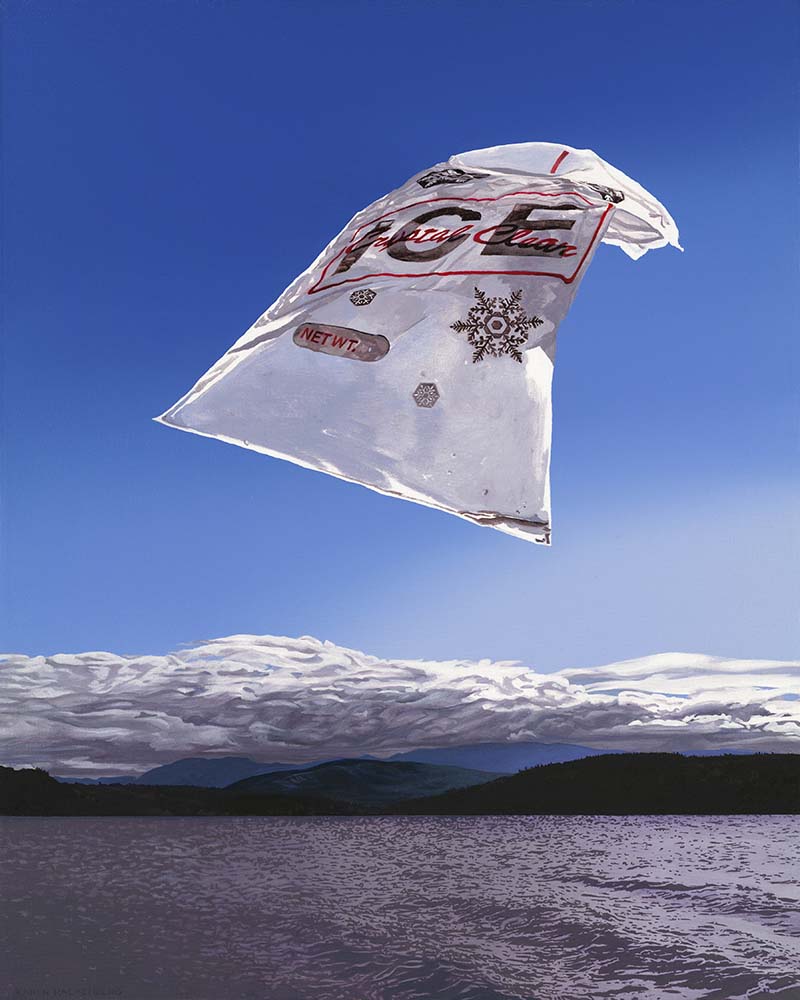 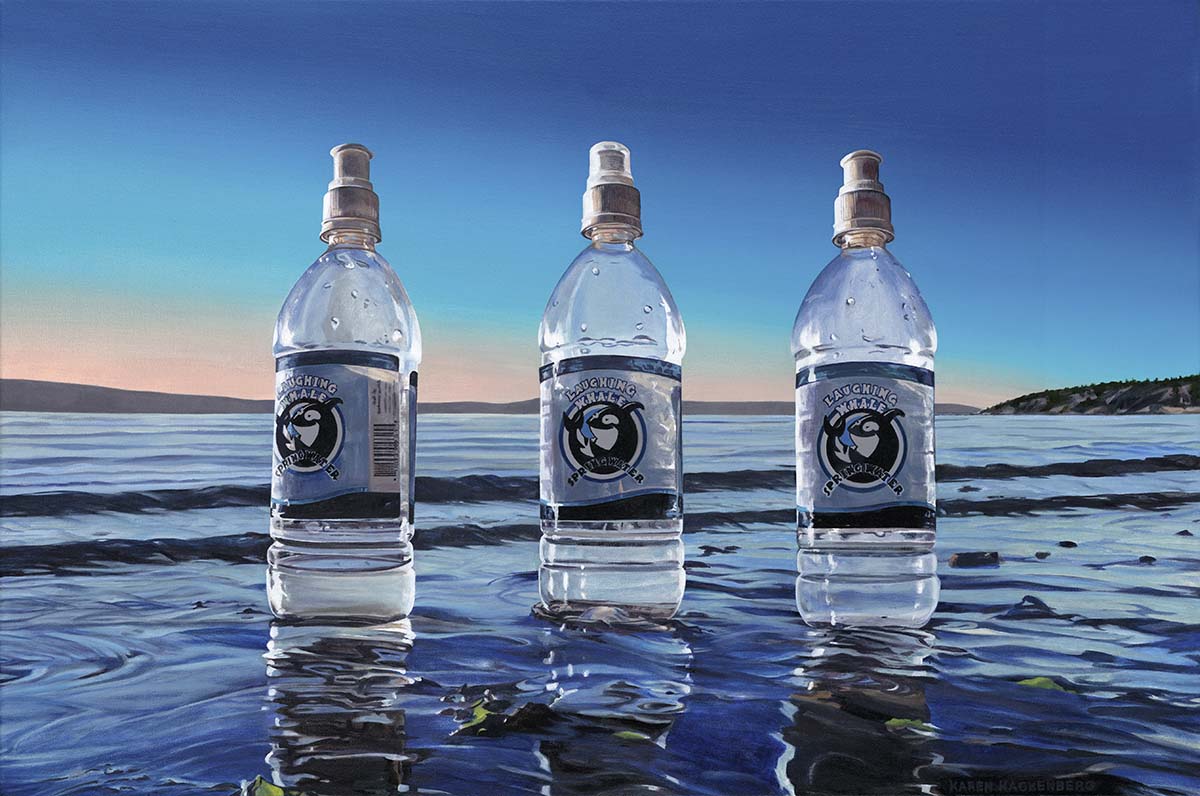 Karen Hackenberg: Orca Pod
2016 - oil on canvas - 24x36
In Orca Pod, three water bottles glow in Pacific Northwest light along the tideline and serve as stand-ins for our endangered southern resident orcas. Sporting cute cartoonish illustrations of whales, the bottles belie the deadly effects of plastics on marine species and on the orcas themselves.   Courtesy of: Tacoma Art Museum 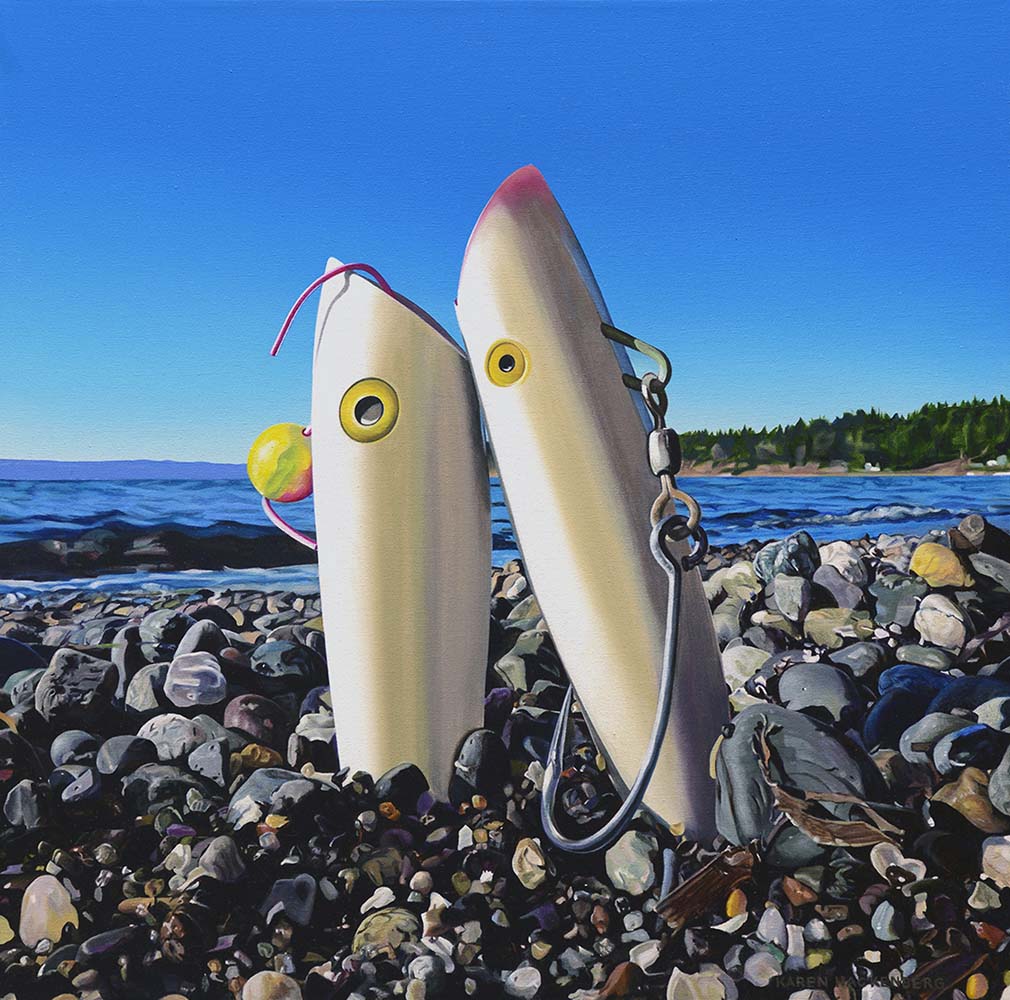 Karen Hackenberg: Hook Line And Sinker
2016 - oil on canvas - 24x24
The fishing lures get cozy with each other in Hook, Line, and Sinker, just as we humans have gotten cozy with the idea that we can consume more and more natural resources, abandoning our discards in the ecosystem and embracing this voracious entitlement, hook, line, and sinker.